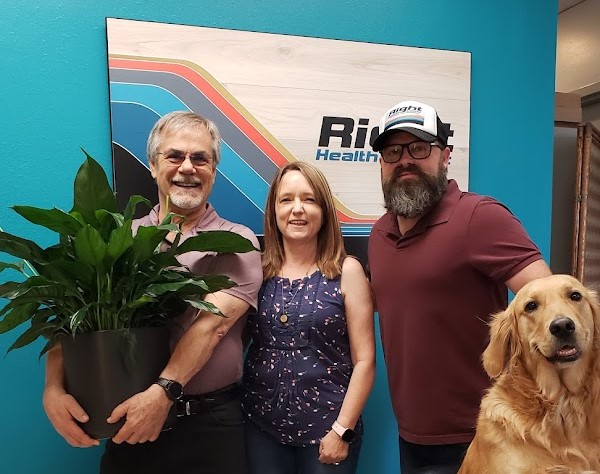 Our mission at Right Health Clinic is simply to serve you. We provide excellent chiropractic care to help our patients reach and exceed their health goals. We assess the patient as a whole. We want to address the main concern, but also lead you into a lifestyle of being pain free. We do all of this by offering an evidence-based approach to chiropractic care by utilizing chiropractic manipulation, soft-tissue techniques, therapeutic rehabilitation, and a variety of chiropractic services to help achieve your health goals.

Up until his mid 40’s, Chris Foster never imagined the journey he would soon embark upon. It was one of those “right place, right time” occurrences that set the wheels in motion that would transformed him from being in the construction industry for 25 years to graduating near the top of his class as a Doctor of Chiropractic at 50 years old.

Now, some 15 years later, he continues to live the experience that one of the influential chiropractors he visited over the years as a patient had shared with him.

Since Chris was always a curious person, with a thirst for knowledge, he would always take great interest in what his chiropractor was doing and why. After endless questions over the years, his chiropractor, Dr. Drew, finally asked, “Given your never-ending curiosity, why don’t you just become a chiropractor?” Chris responded to the question with his own question: “What is it about being a chiropractor that most drives you?”

Dr. Drew responded with a simple statement that Chris Foster never forgot. “Because, in my office, a miracle happens every week for one of my patients. Whether it involves less chronic pain, fewer headaches, or perhaps a complete turnaround in their overall health, it is a significant change for that patient.

It may be a small miracle to others, but for my patient, it can be a life changing.”

That statement set all of what happened afterwards in motion. Now, looking back, Dr. Foster will tell you that it is the complete truth. As chiropractors around the world all know, what they do for people can literally change their patients’ lives for the better. Now, if that’s not incentive, I don’t know what is.

He is a family man with a joy for life that is contagious. He believes life should be fun and truly loves to bring that out in those around him.

Dr. Wren was a NAIA collegiate soccer player at Biola University where he received a Bachelor of Science in Sports Physiology and Biblical Education.

He continued on to become an EMT, graduate from the Fire Academy and Police Academy, to serve the citizens of Lakewood, Colorado as a Police Officer. After a career ending injury, he is now able to empathize with those who suffer low back pain. This experience allowed him to transition his passion for service into the wellness community.

As the owner of Migun Wellness Center of Colorado Springs, Dr. Darren surrounded himself with like minded individuals who believed that heath care should not stop at pain management, but begin at prevention and continue towards optimal living. It was this passion that ultimately led him on his journey towards becoming a Doctor of Chiropractic.

Dr. Wren graduated with honors from the Southern California University of Health Sciences as a Doctor of Chiropractic and now serves the community of Colorado Springs.

Dr. Wren’s passions include: his wife of 15 years, Marleen, and two young daughters, Abigail and Charlotte, who also share daddy’s passion for fun.

He has over 16 years of coaching experience ranging from athletes 5 years of age to the Women’s Collegiate level.

He enjoys spending time in the outdoors with his family camping, mountain biking, taking his dog Aspen to the dog park and going to the Zoo.

I highly recommend Dr. Chris! He is skilled, personable, and caring. He has helped me recover from surgery and from a car accident. His approach is... read more

Dr. Foster has helped my husband and I with many painful problems. His decompression service saved my husband from back... read more

Lorraine and I have been seeing Chris for many years. Chris listens to your concerns then treats you accordingly. You cannot argue with... read more

I highly recommend Dr. Chris! He is skilled, personable, and caring. He has helped me recover from surgery and from a car accident. His approach is thorough and gentle.

Dr. Foster has helped my husband and I with many painful problems. His decompression service saved my husband from back syrgery.

Lorraine and I have been seeing Chris for many years. Chris listens to your concerns then treats you accordingly. You cannot argue with results. Plus, after so many years, we've become friends.

Accessibility by WAH
Call Us Text Us